Maybe I should have made this post before the premier so some of my more distant friends could come but I guess its too late now. 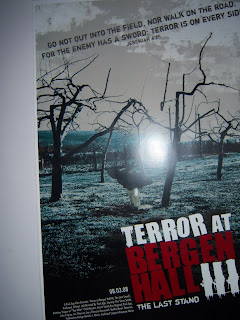 when I get a youtube link I will post it, or them
but this is a movie trilogy that my friend paul epp started when he was at providence bible school making the first 2 there and the third ones setting is in winnipeg. my brother in-law steve smith plays the main character in all of them and I am his sidekick in the third one. it really is a blockbuster of mass proportions so you should watch it, when it gets on youtube.

heres a little promo that is on the facebook event

In the third installment of the TABH trilogy, a new more powerful "Killer" emerges from the forests of Providence College bent on seeking revenge on Steve Smith for the defeats of the past killers. When the new "Killer" finds out that Steve got married and moved to Winnipeg, he begins his plan to bring Terror to Steve and all that he loves.