my short lived tree planting season in a nutshell

day 1: travel day #1
winnipeg- thunderbay 704km
wake up at around 10ish finish packing my gear, eat some cheerios, pack my car, say goodbye to my mom, pick up some last minute stuff.
start my journey into ontario me and my 97 cavalier, i could write everything that happened between here and thunder bay but i wont.
day 1 by the numbers
17 deer
4 moose
too many birds to count
1 bag of chips
3 cans of green tea gingerale
1 liter of water mixed with a little bit of lemonade
5 opp sightings
slept at the terry fox memorial near thunder bay wielding a axe 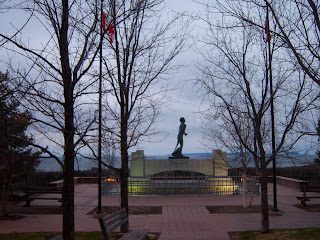 day 2/ travel day 2
thunder bay- nakina/cordingley lake campsite 340 km
start the day off at 7:30 drive back into town and pick up some breakfast at mcdonalds hit the road, nothing to exciting happens other than finding out i drove a little over 800km on 55 liters of fuel which is good for my car. it is snowing for like 50 km of the trip stops snowing 50 km from nakina. arrive in nakina, try to find gas station that is supposed to have directions, find out gas station is closed, randomly see a bus that says wilderness group on the side that is picking people up at the train station follow it to camp, it is raining as i set up my tent. i struggle to keep everything dry and in doing so try doing everything too fast and end up making mistakes that end up with things getting wetter than they have to. eat lunch and supper at camp, meet random people, get separated into our crews, i am the first to aquire a nickname "pneumonia" i am called, some people only know me by this name by day 7. sit around a campfire, i wear a straw hat and read into the wild. get to sleep early. 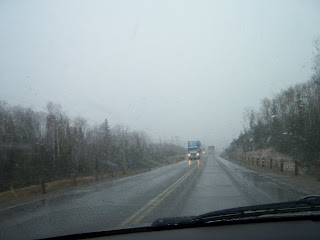 day 3-7
wake up 5am, eat big breakfast, make lunch, leave at 7ish(usually later because nothing goes on time) riding in old school buses painted white driving down rough logging roads , arrive at the block at 8ish,
plant trees: ok so im not going to explain everything because im lazy and i dont think you guys care that much haha but this is what tree planting was like for me. so you get dropped off at your cache( a tarp that is your base camp basically, your boxes of trees go under this tarp) so you have boxes of trees all one species( i did mostly black spruce) usually 500ish trees in one box
, and so from there the crew boss tells you to flag your piece so they give you landmarks or other such things to follow and you make a line with coloured tape to flag your piece of land. then you start planting trees. the hardest part about planting trees for me was not so much physical(though on day 4 when i started to feel sick again it was mostly physical) it was mostly mental. you get dropped on this piece of land and are supposed to plant, there is barely any soil showing so you have too look for soil and you have no idea where you are supposed to plant
, its all so confusing for someone who is usually creative but has a great fear of quality checkers
and doesnt want to replant. they dont really explain it to you that the only thing that matters is that the tree cant be pulled up easily, thats what you have to learn from the few veterans who are willing to share secrets.
5ish -get picked up by bus, 6:30 get back at camp, 7-8 supper 9 bed time again
friday was one of the worst days of my life, i worked pretty hard until around 1pm but after that i was just dead i could really walk or do anything, i tryed to plant as much as i could finished one box for the day which at 9cents a tree and - camp fees was around $31, i didnt do much the last few hours and struggled up the steps of the bus, offered a beer by the crew boss as i gained my balance on the top step on the bus stairs i declined and said i dont drink(which isnt entirely true, i will on occasion drink limited amounts of alcohol, i just mostly dont like beer)
so then we took our bumpy hour long bus ride back to camp while i had a mean headache and was drifting in and out of consciousness
that night was party night, every one had there alcohol that they had gotten the boss to pick up charging it to cash advances( i dont think most of the people made much more money than they spent on alcohol haha) i ate supper and hit the bed because of my rough shape only to be awaken by loud music at around 9 accompanied by drunken chants and yells, must have been around 3 when the party died i was in and out of sleep during that time inbetween.
we had a day off on saturday, early in the morning 7ish i was awaken by the loud buzz of float planes buzzing our camp, they must live in the houses right next to our camp and been anrgy because they seemed to have flown over us every chance they got, i found it funny because it wasnt directed to me and i wasnt the one with the hangover.
went to town did my laundry and other uninteresting things.
by now im tired of writing which probably means your tired of reading but my last day was interesting too in a whole different way.

day 9
same morning schedule as previous week, reports that it is supposed to snow 10cm
work till about 10 no snow yet, cant do it anymore i can barely walk, i have little energy. tell everyone im done, then when they ask if im done
for the day i tell them im done done, they seem to have seen it coming, with my physical state they feel bad for me. i flag down my crewboss tell her the news she thinks im making the right decision. get picked up by someone else in a truck who is going back to camp eventually, ride around in his truck while he works, he doesnt seem to have the same concern for my well being thinks i should tough it out in which i reply, i would but i feel like im going to die. eventually get dropped off at camp in which i go see the boss and tell him that i may still have pneumonia(really i kinda ommited the fact to him earlier so he didnt know i had it in the first place), he seemed pissed that i was even there calling me stupid several times( to be fair i dont think he was having a good day) he told me to pack up and leave(without me even telling him that i had decided to leave) but then later gave me a option of staying in which i declined. so then i packed and left.

drove home taking lots of pictures som of them actually turning out really good even though they were taken with a camera with no viewfinder and take while driving 90km end up trying to sleep in a walmart parking lot in dryden for 3 hours but not having any luck just ending up driving home got gas in dryden at like 3:30 accidentally put premium in my car, drive by a few deer that could have easily jumped infront of me (thank God that they didnt) purposly drive through kenora instead of bypassing it so i can go to tim hortons to pick up a donut and coffee but they dont have any baked goods for sale due to them being in transition from days so i just get a coffee and drive away bitterly. drive the last couple hundred kms arrive in winnipeg unaware that is the long weekend, find my door locked at 7:30 in the morning drudge through the doorway.. and so it goes 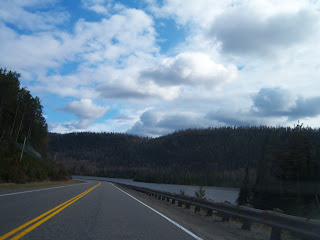 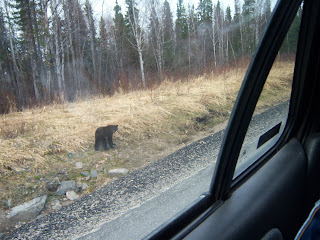 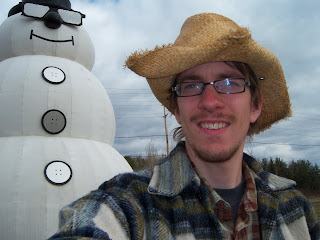 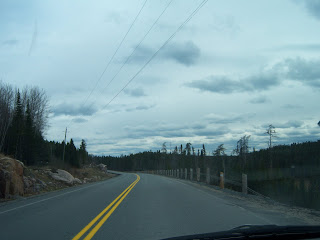 Chad, I'm so sorry to hear that it didn't work out! It does sound like you had quite an adventure though. I will pray that you will recover from your illness and that things will look up. By the way, does this mean you are doing 5 weeks at camp this summer? If so, let me know, we'd love to support you. . . take care!