I know this isnt a very long post to have 2 parts but I need to go to sleep and I want to put a blog out there.


This past weekend I went on a canoe/ fishing trip to side saddle lake, we left Thursday evening at around 7 pm picked up the canoe(not mine but my friend Paul's) only really got out of the city at 8ish. So it was me, Jeremiah, and Paul, we drove to big whiteshell lake saw about 25 deer on the way as it was dusk we got there at about 10 and got in the lake just as it was getting dark. I had to park the car about .33km away so i ran there and was wearing this so i did get a few weird looks as i was running through a campground
. 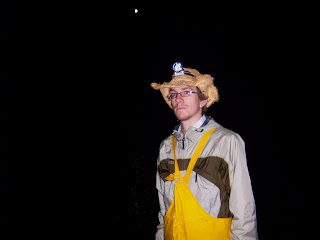 so we got out on the lake Big Whiteshell and started canoing, didnt have very much wind which was partly the reason we went at nighttime because the lake is pretty large. we paddled(aprox 7km across and down to the crowduck portage(.75km) which for a while I didnt think we would even make it to because we had no clue exactly where it was but we found it. portage was pretty easy a little steep on the way up but a nice path and right near the end a 40m bog area which wasnt too bad but i was up to my mid shin at times. 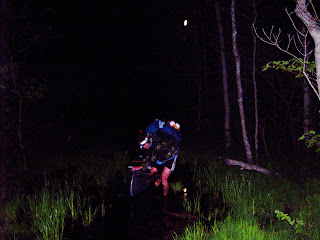 so we finished the portage and went on to canoe crowduck, which if you look on a map is a huge lake which actually kinda looks like a swastika the original plan was to paddle the whole thing 13-14km but we decide to call her quits after we found a campsite after we got past the widest part deemed "the ocean" which is the widest part of the lake a part where we had to be right in the middle and couldnt hug the shore so we paddled across "the ocean" and were past it and looked for a camp site but open shore was near impossible to find, the shores were thick forests with no openings for a tent, so we kept paddling and eventually found a little opening near a beaver lodge, i guess the beavers had cleared the land a bit and we then we set up camp. so we paddled 7km on big whiteshell portaged .75km and then paddled 8km on crowduck took about 4 hours because of the lack of knowing where we were going all the time. all of this in the dark with a little rain off and on and lightning in the distance that kept me on the edge of my aluminum canoe seat. 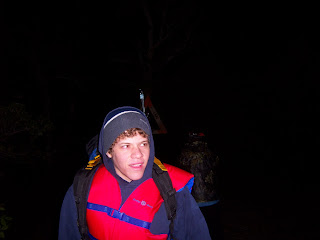 well thats it for tonight

Thanks for the trip report Chad. So how did you find the aluminum canoe? And what is that yellow thing you are wearing in the first picture?

yellow pants or hat. the pants are just cheap rain pants i got at canadian tire