sorry i havent had alot of time lately which makes blogging pretty low on the list of things I need to do, but ill try to finish this trip writeup.

well saturday we were woken up by float planes overhead none of them destine for our lake which was a sigh of relieve, i believe i made a comment like "ze germans are coming" when i first heard the planes, dont think anyone else was awake at that moment but i thought it was funny. we got up had breakfast secured our food up in a tree and headed off to go to saddle lake, the lake right beside us. just a quick little paddle and we were at the portage, on the map it looked like it probably wasnt any more than a couple hundred meters but the triangle said . 5km, and it seemed longer than that, we got through that one pretty easy though. i would post more but i dont really remember everything about this day, i think it was raining off and on, we had pretty good fishing, not alot of fish but it was still good. we stopped on shore for a while, me and jeremiah went exploring after we made a fire and let epp tend to it, both of us got a little cut up from our walk through thick bush and scaling a rockside holding onto plants that had thorns, actually i think jeremiah got cut up by that, i just accidentally cut myself with my knife. we had stuffing for lunch/snack yeah thats right i said stuffing, just stovetop though, and it was more of a soup than a stuffing, it was actually quite gross. then we left to go fishing again after "I told the fire some of my secrets" inside joke, we caught some fish jeremiah had what looked like a mid 30s northern pike on the line but it snapped his line, then we were near a waterfall, i cast out my line right beside the bottom of the waterfall, a largemouth bass immediately hits, i reel it in its like 13", might have been two casts later and i bounce my lure off the shore again and another bass hits and i reel it in i go to grab it and somehow it ends up in my feet, the hook pops out of the rod and goes straight into my ankle the fish still flopping around i take the hook out of my ankle and throw it over the side of the boat, i pick up the fish and pose for a picture then measure it, its 17.5" half a inch short of master angler i put it back in the water it zips off i tend to the cut on my ankle its not bleeding too bad but some blood is coming out, then go to fish again, look to my right side my rods not there look to my left side the rods not there either, i say "wheres my rod?" crap its at the bottom of the lake. so i went from such a high point to such a low point, that sucked. we dont do alot more fishing maybe because they feel bad for me but we head back soon. have supper and shoot off some roman candles. make some jiffy 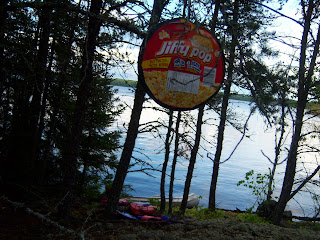 pop mmm and hit the bed. 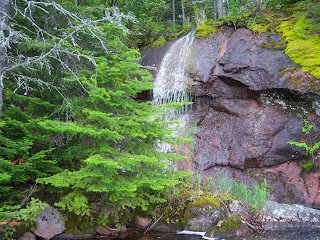 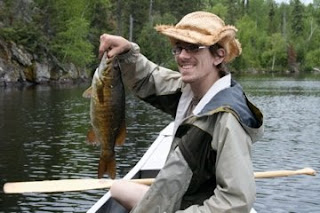 sunday we wake up eat pop tarts, break camp and head out, we make predictions of how long it will take to get back paul says 7 jeremiah says 6 i say 5 or something like that seem to remeber saying 4 and half but that doesnt make sense time wise in my head. we head out the wind at our side on the first lake which was good news for us because it meant the the middle lake "the ocean" the wind would be at out back. so we breeze through the 1.75km portage paul only takes 1 break. we get to crowduck and the wind is still at our backs so we are going a pretty good clip then right when we get to the widest part, the part that we wanted the wind to co operate with us it turns and is going sideways on us and pretty vicious. we strategically go straigh into the wind and zig zag our way to the other side, waves crashing against the hull. we get through it and then the we are shielded from the wind by the shore. we see 2 bald eagles sitting on a dead tree, we paddle almost right up to shore where the tree is up on a cliff just above us, none of my pictures turned out though mostly because i cant see what im taking a picture of with my camera and i had it zoomed into the sky. we go through the crowduck portage with ease he way there we took the bog but the way back when we could see we took a path where there were logs to stepp on the whole time it was bog. get to big whiteshell the wind is fierce and directly against us which is better than directly beside us but it makes it alot harder to get anywhere we have no shore to protect us and soon the waves almost turn into whitecaps it was a battle well fought and we made it through. we make it across the big lakes safely. get to shore and run to my car(thats what i call the iron man wilderness edition (canoe, portage, run to the car) w epack up and leave but not before my driver side mirror gets ripped off because we had our rope that held the front of the canoe wrapped around my mirror and i threw my car into reverse and i guess the rope got slack and got caught under my tire. I am within 5 minutes with my time prediction.

phew that was alot of typing, i dont know how much of it is coherent but i hope someone still enjoys reading about my adventures. 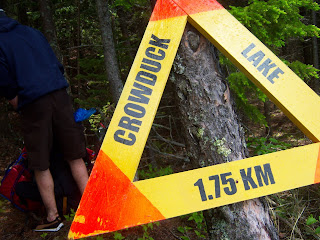