a lesson on unity- part 1 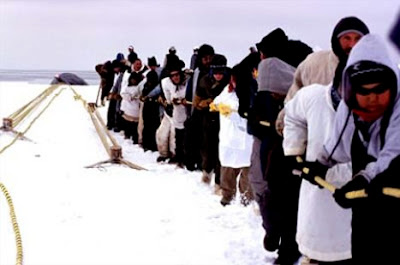 
When I was on St. lawrence Island in Alaska this past may I was in a village named Savoonga (sa-voon-ga) I got to witness a culture completely unlike the present day life that most of us are surrounded with, I had that in both villages on St. Lawrence Island but in Savoonga I got to hear of and see a video of a whale hunt. Now these villagers live alot off the land, and if you went to the store there you would see why, so its more than just a hobby its life. There is lots at stake and so they take it very serious, I have also seen the excitement the very thought of being able to provide for your family has brought some of the younger generation. This whaling business is very organized too, with whaling commissions, whaling captians, etc.

There are many roles in even beginning a whale hunt, they even have camps set up in areas away from the village so that they can be close to the action, so you have to get your equipment ready, get your troops together, and get there and those are just the basic physical start ups. Each boat is its own team, with its own captain and crew of about 5( I'm guessing on the numbers based on what I've seen) these boats are usually 20' LUND aluminum boats. From what I saw there were maybe 10-15 boats out on a hunt. Now these days the communication tools they use are cb radios but back before they were around there were hand signals, maybe flags, but they know that communication is key to working as a team especially with the stakes of success being survival. Now from the people left back at the village, to the people left at camp, to the people out on the boats everyone works very hard and also reaps benefits of success. Teams among a bigger team, they way it works out on the water is when they see a whale they are set into motion trying to find it when it surfaces surround it and throw a harpoon rigged with an explosive tip at its heart, and while it may only take one harpoon each boat is indispensable the video i saw of the kill included many harpoons being thrown at it, a buoy is attached to the first harpoon making its whereabouts known even when its under the water.

Now that you have 40 tons of dead whale in the water you are faced with a whole new task, getting this whale from here to shore, now im not sure exactly how this boat ride looks like but they hook their boats up and drag the whale by the tail, sometimes they cut parts of the whale off at first to eat and then get on there way. The task of getting the whale from shore to land is a whole new task, like a big game of tug-o-war heres where it doesnt matter who you are you are on the rope pulling for all your worth, when there is work to do everyone does there share. when the pulling is over next comes the butchering, now just imagine working your way through 40 tons of whale, nothing gets wasted. usually you dont sleep at least not very much until all the work is done. When the work is done , all the food brought back to the village, everyone gets there share of the plunder.

i dont blog well while i am nervous

haha well nervous isnt probably the right word but i have been quite anxious probably over anxious concerning my future plans. God has really put Alaska on my heart as a whole, pretty much telling me that at some point im going to be back up there, now the big trouble in my heart was concerning when. on one hand i had big crazy ideas of going back the begining of september which would be in like 2 weeks doing a short stint, on the other hand the more sensable going in january with a 2 year commitment. and to be honest im kinda dissapointed that its not the crazy short adventure but how its replaced with a responsible more commited time, but not in a whole of me sense but in the crazy part of me which i will call adventourous. so yes i have decided to hold off at least until january on my alaska trip, which will give me time to actually follow up wtih my campers from the summer and also do a bunch of stuff with the ministries my church has really been establishing these past years, and also make some money to support myself, so now i got to find a job yay.

im really wanting to mature alot in these next months, i now see my fears and know how they are holding me back from being all that i can be for God, now its time to take courage and step up to the plate that has been set before me.

my last post might seem random to you but it was a creative presentation that i gave at some point on my dts.

There once was a girl named Joyous Jaquanda she lived in the central part of Swaziland. Jaquanda was always joyous no matter what so she was called Joyous Jaquanda. Living in such a poor country with no family all Joyous Jaquanda had was 2 francs a hut and an imaginary friend named Jittery Jeffery.

One day Joyous Jaquanda was having tea with Jittery Jeffery when suddenly rebel forces came and took away her 2 francs shouting " who's joyous now" but she remained joyous and retorted "at least i still have my hut and my best friend Jittery Jeffery". Little did Joyous Jaquanda know about the effects of that evenings events on Jittery Jeffery he started questioning the tumultuous political rift that was taking place for land that in the end has no value while it is in a wartime rage and while outside help trys to help they end up stiring the pot deeper and so on and so on(you know jeffery and his politics).

Meanwhile Nice Nick was shooting mortars into rebel territory when a mortar went sailing into Joyous Jaquanda's hut causing it to collapse. Fortunatly Joyous Jaquanda and Jittery Jeffery both got out alive. they slept in the ruines of Joyous Jaquanda's once existant hut, it was a cold dark night. In the morning Joyous Jaquanda was still joyful saying " at least I still have you Jittry Jeffery".

well its been a while since i last posted, dont really have computer access or time at camp. so these past 4 weeks I have been at Beaver Creek Bible Camp and its has been utterly amazing and spectacular. God has been moving strong in the lives of the campers and also the staff, we have had alot of commitments to Christ, and alot of spiritual warfare, ive found that spiritual warfare often looks like loving kids who dont recieve it anywhere else. The main topic of the summer is the armour of God and its has proved to be a good topic as we have felt Gods protection and also have been able to share lots of Truth, words cannot describe how amazing it is to know that God has given us the ability to grow under his protection. areas that you can be praying for the camp is again that we will rely on God and not on our own understanding, that we will be listening to Gods voice and discerning the areas where hes wanting us to step out in faith. also pray for the campers, pray that they will be open to recieving the Lord and that the Holy Spirit will show them the life that they can live. for me pray that i will be spending personal time with God and really operating out of what hes putting into me and not on my own means.

as to my future, after this next week of camp I am very unsure of whats next, be praying for me in this. I am considering the options infront of me and trying to figure out what to do with them and what God is leading me to do. basically I know that I am going back to alaska just not sure when or with whom, and for how long. ywam would want a two year commitment and maybe thats where Gods calling me, i would be a staff and would have many opportunities to grow in my leadership but it will not come easy, living by faith, would probably mean selling my car. another option is going up just for a outreach, i really feel called back to St. Lawrence island so this would be a option that would look nice, and a option that I just remembered was a option is moving to st lawrence island and living with the pastor and his family in one of the villages. please be praying for me, i dont want to go without the blessings of the people around me. the earliest i would leave would be in september, and the other option is january.
thankyou for your prayers
God bless
chad
Posted by Chad at 1:46 p.m. 2 comments: